The Rock responds to viral picture of his doppelganger. The Hollywood star’s lookalike is a Police officer from Morgan County Alabama.

Most men around the world would give an arm and a leg to look like WWE Champion turned Hollywood Mega Star Dwayne ‘The Rock’ Johnson. However, a police officer has seemingly hit the genetic jackpot. Morgan County Sheriff’s Office Patrol Lieutenant Eric Fields has gone viral for looking eerily similar to the actor.

His picture was originally posted to the Morgan County Sheriff Office’s Facebook page. It then featured in a TikTok video with over 1.6 million views.

“I’ve been called The Rock and Vin Diesel’s love child,” Fields told AL.com. “I go along with it. It’s humorous. It’s flattering. It could be worse people, I guess.

“I just plan on being me. I’ll cut up. I’m a big cut-up,” he added. “If it comes up and somebody says that, I’ll play along. I really couldn’t be anybody but me. I’m just glad I could be part of someone’s happiness and laughter.”

The Rock responds to viral picture of his doppelganger

The Rock noticed the picture and sent him a message on Twitter.

“Oh sh*t! Wow. Guy on the left is way cooler. Stay safe brother and thank you for your service. One day we’ll drink @Teremana and I need to hear all your “Rock stories” because I KNOW you got ‘em #ericfields.” 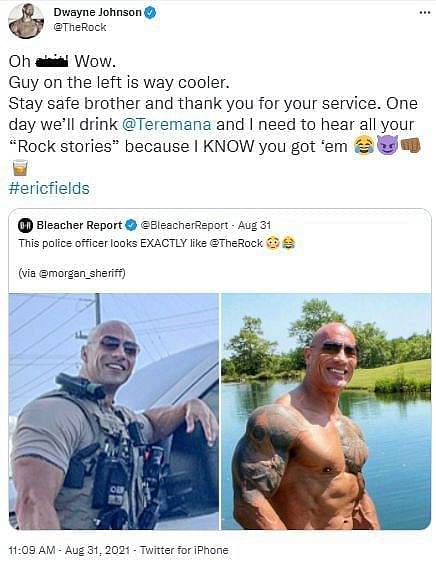 The Beginner’s Guide to Weight Training for Men in 2021

Deciding to seriously go after your fitness goals can seem daunting at first. Beginner workouts are useful to help get…

The Best Leg Exercises For All Levels Of Gym-Goer

It’s always tempting to skip leg day, mostly because no-one enjoys the DOMS that tends to follow, but no weight…

Squats and deadlifts are the meat and potatoes of a good lower body training day. Whenever you can combine the…

Do you want Thickness in your legs? do you want to build crazy mass? Well follow this Leg workout and…

In this episode Coach Ali covers day 26 of his 30 days dumbbell workout transformation challenge. This workout focuses on…